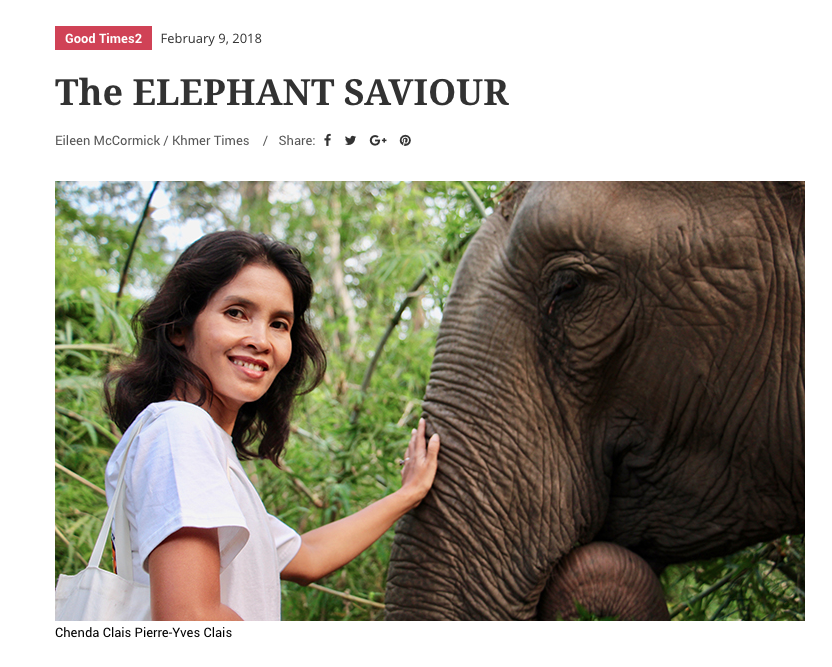 Chenda Clais, founder of Airavata Elephant Foundation and owner of Terres Rouges Lodge in Ratanakiri province, considers herself lucky to be working with elephants. As foraging places disappear fast due to deforestation, she tells Eileen McCormick that sanctuaries seem to be the only hope for saving these majestic animals.

Good Times2: When was the first time you met an elephant up close?

Chenda: The first time I came in contact with an elephant was through my work. That I was able to ride on an elephant and to describe how I felt later would not do the experience justice. It was just amazing. I was this tiny woman on a ginormous animal. When I told it something, it would listen to me and it was as though there was a holy communion going on between the elephant and me. As we made our way through the jungle and I could just reach up and touch the leaves, while sounds became so much more rich and intense from the birds chattering to the sound of water trickling.

Good Times2: When did you decide to start an elephant sanctuary?

Chenda: I worked in ecotourism in Ratanakiri for many years and we provided the programme with elephant rides and elephant baths. However, as the elephants become larger they tend to be an enormous burden on the community of indigenous people. As a result, food and care becomes a problem for these elephants. Elephants are not just ordinary animals and if they are harmed in any way, it would just bring us bad karma. 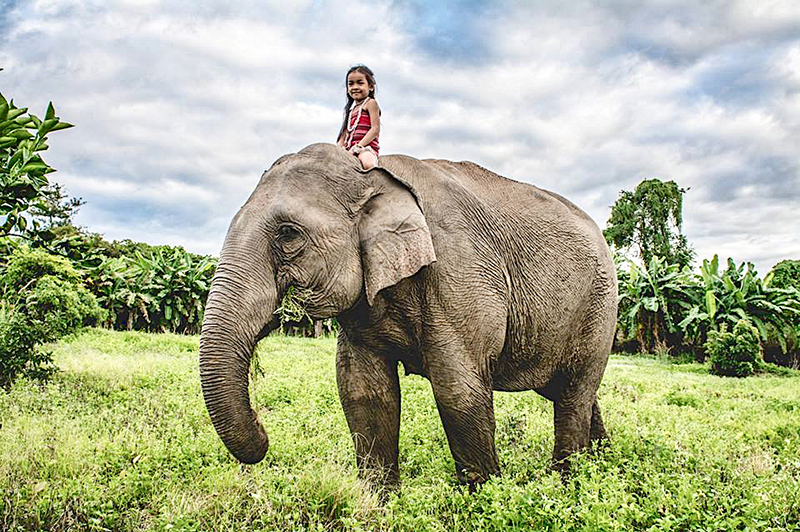 In the past, elephants could forage for food on their own with little help from their mahouts. As development moves forward, more and more forests get cut down and the foraging places for these pachyderms are disappearing fast.

Many companies support ecotourism by helping indigenous communities promote elephant riding. But to be frank, they simply do not work. Many of these communities that work with elephants don’t have a money system. Once it’s introduced they would fight over who should pay the cost for more food and other care, if they take tourists around on elephant rides.

The communities want to benefit from elephants but they do not want to give them the needed care. The elephant’s favorite is banana leaves and it must eat up to 200 kilos of leaves per day, which is too much for just one small area of forest. This means the mahout must move the elephant around to different spots. So they must go far and spend a lot of time. Because of this and they blame each other for not giving money to support the elephant. You must take care of an elephant like your family member, if not you will have bad karma.

With all of these issues I have seen through my 20 years living in Ratanakiri I started to feel like I should find a way to help. I never thought I would help like this, but here I am almost three years later running this elephant sanctuary.

Good Times2: How did it all start from securing land to buying the elephants?

Chenda: Land concessions are a big challenge for indigenous communities and that’s the main reason why they want to stop taking care of the elephants. They lack the means to challenge the large companies going into their land. I’m not using my own land in the sanctuary and it is actually part of a 500-hectare community forest. We keep the elephants in three villages in the area because that’s where most of the wild elephants come from anyway. We haven’t changed their home. These elephants are like us, humans. When we have a home we don’t want to move to another place. 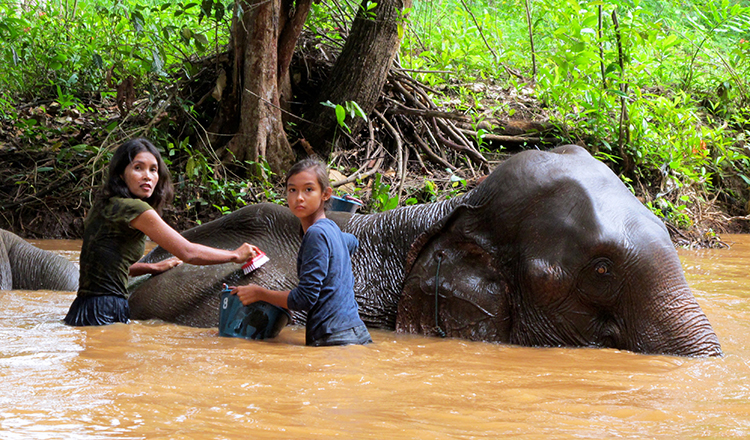 Good Times2: What is the process of buying the elephants?

Chenda: The mahout team is from the community forest and they have rich local knowledge but limited resources. So, I buy the elephants from them and employ the mahouts to work for the sanctuary. I actually don’t own all the elephants, yet, and can only afford to buy one at a time because they are about $50,000 each. I’m asking others, in my network to help me, and they promised to donate their time to help fundraise this year.

Right now we own four elephants – three are from the community forest and one is from Mondulkiri. The elephant from Mondulkiri is Bak Mai. The other sanctuaries didn’t want him and he was condemned to death by starving for having killed a man. Yet, since day one when he arrived in our care, Bak Mai integrated very well with the other elephants and his mahouts love him!

Good Times2: What is the history of elephants with indigenous people?

Chenda: A long time ago these elephants were born into the community, where maybe 20 different families would take care of one elephant. When the elephant had calves it would be passed down to the children. In that era, Cambodia had lush forests and there was enough for the elephants to forage on.

Cambodia now has only about 200 wild elephants left. The rest have been domesticated after so many generations. It’s just like having a pet dog.

Good Times2: What are the traditions used by communities to care for the elephant?

Chenda: They learn things step-by-step, and no one teaches them in one go. It’s passed on knowledge and it goes from father to son and so forth. When an elephant is sick, the community will offer rice wine to the spirits and sacrifice a chicken.

Elephants are considered very honest creatures. So if a mahout lies to an elephant, he will have bad luck and fall sick. If a mahout is married, he must remain faithful to his wife and not flirt with other women. If he has affairs, bad luck would soon follow him. The relationship between a mahout and an elephant is like a marriage. When they first meet, a Brahmin priest performs a ceremony that involves sacrificing a chicken and smearing its blood on the head of the mahout and the elephant. This, then, is a bond for life.

Elephants went to battle to help the Khmer people so they are considered as warrior spirits. Because of this, elephants are highly venerated in Cambodian folklore. I consider myself very lucky to work with elephants and many people have commented that my karma must be good. 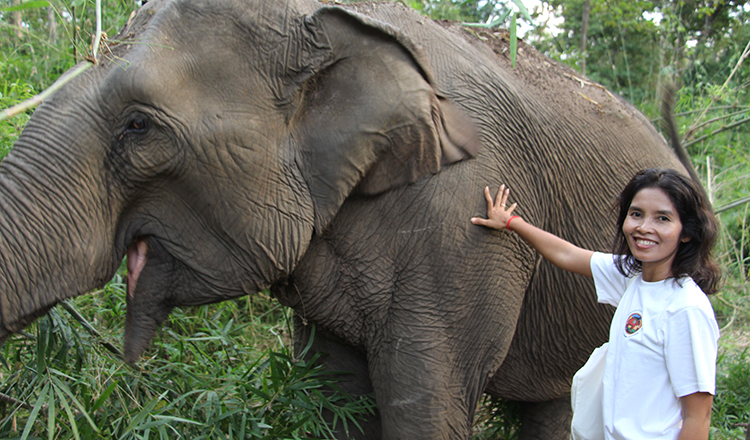 Good Times2: What is the maximum number of elephants that the sanctuary can handle?

Chenda: The forest can handle many but taking into account the number that need care, I would say the maximum is 20.

Good Times2: Are any of the elephants, under your care, released back into the wild?

Chenda: No. They are like family members and if we push them back into the forest they would be very sad. They know the families that have looked after them and also know the communities well. Research shows that elephants are social animals and how they can work closely with humans. They even know where their family members and friends are buried and will go back years later to the same spot to cry over their graves.

Good Times2: Are you seeking more funds for your elephant sanctuary?

Chenda: We need to do more fundraising because right now it’s only me who is supporting the sanctuary. Some of the proceeds from my Terres Rouges Lodge goes to the sanctuary. But we still need more funds.