After killing his owner last year, a 32-year-old bull elephant has trekked through the forest to a new home in Ratanakkiri province, with hopes of beginning a new life 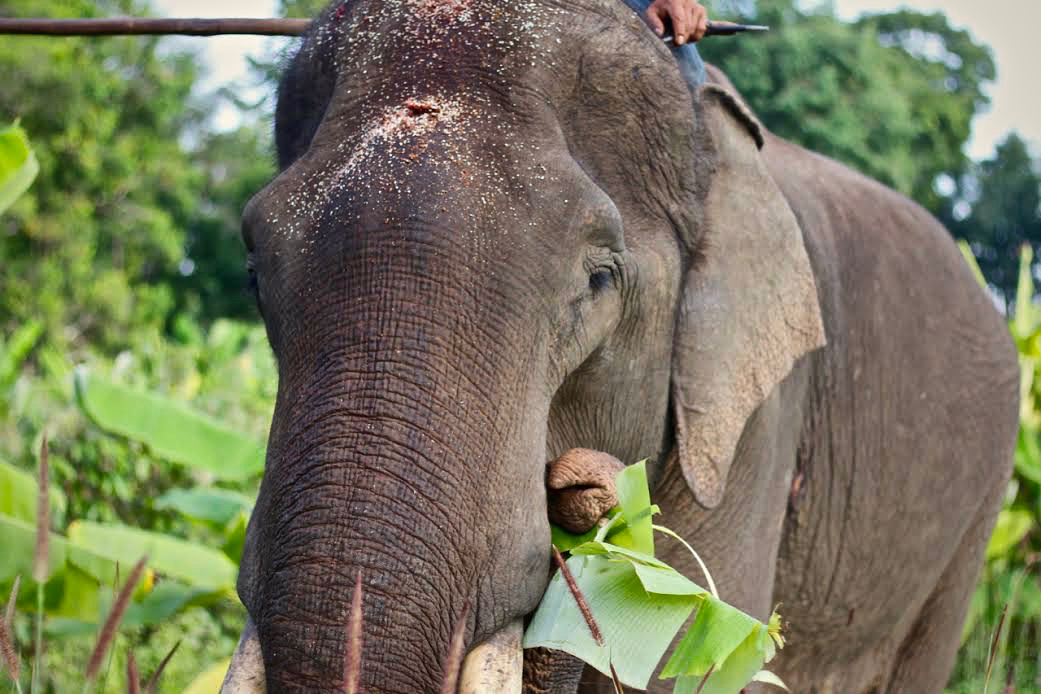 After fleeing captivity, trampling his owner and fatally piercing him with his tusks in a frightening rampage, Bak Mai was chained up and left to starve in a Mondolkiri province forest. Branded a savage, the 32-year-old bull elephant, once popular with tourists, but unable to earn his keep, faced a bleak future.

Villagers had chained Bak Mai’s front and back legs to trees. Mired helplessly in the mud, the elephant ate banana bunches thrown from a distance.

“When I saw that, I almost cried,” said Pang Pich, site manager for the Airavata Elephant Foundation. “I felt so much pity for the elephant.”

Nearly four months after the September attack, the conservation NGO threw Bak Mai a lifeline. He now has a new home and new owners, who express hope that he will be able to reclaim his old personality from a happier time, when he was a beloved companion to tourists on jungle treks, remembered for kindness and cuddles.

But getting this far hasn’t been easy.

The first steps out of Mondolkiri were the hardest, Mr. Pich recalled. Three mahouts—or elephant trainers—had spent a week learning a local language, Banong, so they could issue commands Bak Mai would understand. One day in October provided the first real test. The mahouts were to climb aboard Bak Mai’s neck for the first time since Pop Sreang, his 55-year-old former owner, had been killed.

“They said that if they died they wanted me to take care of their wives and children,” Mr. Pich said. “We promised them: If that happened, our foundation would take responsibility. We would give as much support as we possibly could.”

Bak Mai was not always so feared.

As recently as 2013, he was giving rides to tourists in Mondolkiri under the care of an old mahout whom he had lived with for years, Mr. Pich said.

To illustrate how different Bak Mai’s life had been, Airavata provided one tourist’s review of time with the elephant in 2013:

“He was our elephant for a two-day trek in the forest with a few villagers. He was a very kind animal, very close to people. I remember great cuddles with him and on the last day, just when I was leaving, he escaped his mahout to meet us on the edge of the road for one last hug.”

The old mahout, however, died later that year, putting Bak Mai in the care of his grandson. The grandson himself was killed a few months later in a motorbike accident while driving drunk.

A group of 12 families then inherited Bak Mai. They refused a foundation’s offer to help take care of him, fearing they would lose ownership of the valuable animal, Mr. Pich said.

That refusal led to three years of neglect and without proper care Bak Mai was no longer deemed fit to work with tourists. Chained in the forest, he had little to no human interaction aside from being fed once or twice a week, Mr. Pich said.

Mr. Pich saw the elephant’s living conditions for the first time in early October, after he had killed Pop Sreang. Police has blamed the trampling on the bull seeking a female elephant in heat, but he was later found that Bak Mai had a 10-centimeter nail in his trunk and was likely enraged or in pain.
Mr. Pich returned to his foundation with a proposal to acquire Bak Mai. The families who owned the elephant eventually agreed to sell for $17,000.

“No one dared to take care of it after having witnessed the incident. Everyone thought it was a savage animal,” Mr. Pich said.

The first step in bringing Bak Mai into Airavata’s care was moving him from his muddy chains to temporary accommodations near a stream. 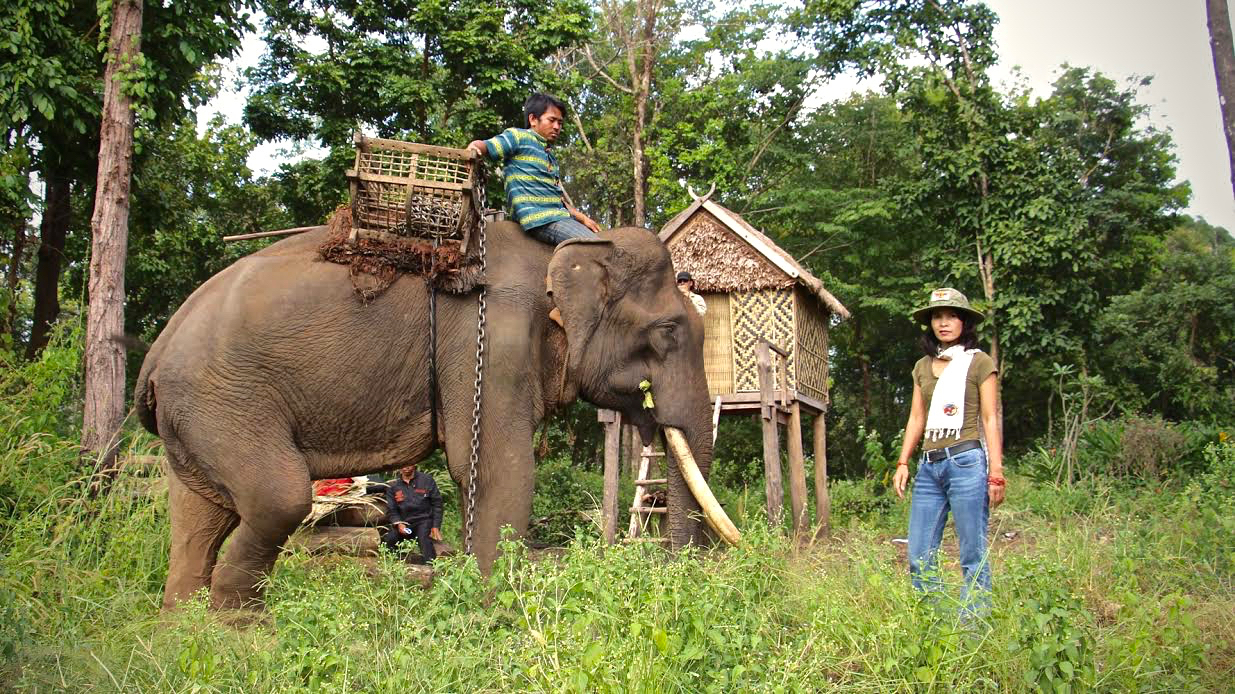 It was a delicate, nerve-racking operation, Mr. Pich recounted. Proceeding with care, the mahouts finally climbed onto Bak Mai’s neck. They got him out of the mud, and walked him about 1 km without harm, he said.

Through October and November, the team prepared Bak Mai for the 170 km trek through the forest to neighboring Ratanakkiri province, where Airavata is based.

The crew left Mondolkiri in early December. Bak Mai, however, was reluctant to depart his familiar environs, walking only 1 km on the first day before he refused to move farther. He began to shake and would not allow a mahout to stay on his neck, Mr. Pich said.

“The first day we took it from there it shook its head, because it didn’t want to come,” he said.

But Bak Mai slowly warmed up. The elephant gradually made his way toward his new home in Ratanakkiri, with the elephant and the team spending nights together in the forest. The journey took nine days, though only four of them were spent walking, Mr. Pich said.

Once he arrived, Bak Mai’s life was transformed, Mr. Pich said, from three years of solitude—chained up and neglected—to daily care among trainers and companions.

Bak Mai was particularly drawn to the foundation’s three other elephants, he said.

Pierre-Yves Clais, vice president of Airavata, said Bak Mai was quick to seek the company of others.

“He is better. He gains weight,” Mr. Clais said. “He came to know three other elephants that we already had.”

“With people around also, he is really friendly and very easy to ride.”

Mr. Clais said his 13-year-old daughter, who has been trained as a mahout, had even taken a ride. “She thought it was so easy to control,” he said. “When we washed him in the river, he was so happy.”

Bak Mai has even started carrying tourists again. Though the elephant has yet to accompany tourists on long treks, they have visited him in the forest and climbed on for rides, he said.

Mr. Clais cautioned, however, that it was still early days in Bak Mai’s recovery.

“We are happy with the progress, but we have to remain cautious,” he said. “We have to remember what he did before. Maybe he could do it again, so, always: caution.”

Chenda Clais, Airavata’s president and Mr. Clais’ wife, said they hope that after a year or so of rehabilitation, Bak Mai will be back in action, joining the foundation’s three other elephants on treks through the jungle.

Beyond that, the foundation also hopes Bak Mai can be used to breed Asian elephant calves, a feat Ms. Clais said would be a first in Cambodia for decades.

Bak Mai is still young, she said, making him an ideal partner for the sole female elephant currently in the foundation’s care.

“We will be trying to gather more female elephants for breeding, because for the last 25 years in Cambodia no one has managed to breed elephants to get an elephant calf,” she said.

“We bathed and washed it and got closer to it just fine, and we carried tourists just fine too,” he said. “It knows us and our smell.”

Mr. Clais, the foundation’s vice president, said there was still a long way to go, and outside experts would be brought in to assist in Bak Mai’s rehabilitation.

“In one year’s time, we will know Bak Mai very well and have a better understanding of him.”

© 2017, The Cambodia Daily. All rights reserved. No part of this article may be reproduced in print, electronically, broadcast, rewritten or redistributed without written permission.
https://www.cambodiadaily.com/weekend/elephant-redemption-123747/