“The dacco, hook, ankus or bull hook is the traditional tool of a mahout. It is indispensable to the mahout who must always have it with him when he is with an elephant. This tool is not there to make the animal suffer, but to guide, stop or move it, it extends the arm of the mahout in a firm way. It is not there to hit but to apply and transmit indications to the elephant. It looks like a woodpecker, an ice axe. Its aggressive appearance often causes unjustified yells on the part of animal activists. It may stem from a good intention, but it also comes from people who are misinformed and do not know well the elephants. Some say that elephants are traumatized by the bull hook. It is not the elephant who is traumatized, but well-wishers who see evil everywhere and who are frightened by the appearance of the dacco.

They claim that the memory of the torture inflicted during training “the hard way” marks them for life. That’s right, but not the dacco. Young elephants, to be trained, are very often locked in cages and beaten for hours to “separate” the soul from the body. It is a horror and it is unacceptable, but what traumatizes the elephant is the wooden bars in which it is locked, the ropes that keep it immobilized and the blows it receives.

But not the dacco and for a simple reason: I watched several videos of phajaam to make my judgment. A horror! But in none of these videos did the sadists who hit the young elephant have a dacco. They had sticks, metal bars but I did not see them with daccos.

A dacco is not sharp and should not sting. It is a security instrument, it can be used to guide the elephant but above all can intervene in case of problems: if an elephant is panicked (following the passage of a helicopter at low altitude for example) which is very rare, it is not possible to stop it with our little human hand, but when the elephant feels the pressure of a piece of metal – neither sharp nor sharp – he understands that he must calm down. It is very rare, but in fifteen years spent with elephants, I remember only four or five episodes of this kind, completely unpredictable, but it was absolutely necessary to manage them accordingly to avoid a tragedy. 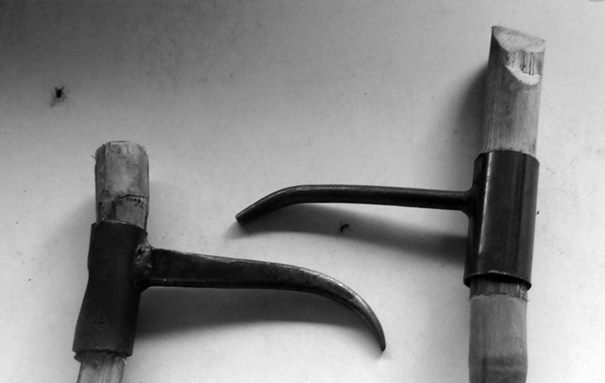 Of course, there are bullies who use the dacco with violence and without mercy, but most mahouts use their dacco very little. The dacco could be compared to the spurs worn by some riders for hard-to-manage horses. Some riders brutalize their horse till it bleeds, but others know how to use just a little pressure to make the animal understand what they want.  A few weeks ago, I went to see an elephant who was in an “ethical” camp. I got out of my car with a dacco to go see the elephant and immediately someone rushed on me to tell me that tourists should not see this instrument, I was simply asked to hide it. So I hid the object in a T-shirt and we went to see the elephant and, since we were not far from the tourists and they could see us, the mahout explained to me that did not use dacco but showed me a big nail that he hid in his hand. This is very serious!

It is not only a lie and a breach of trust, but it is also dangerous: the nail stings the elephant and the suffering can cause it to react violently. In addition, the role of dacco is also to extend the arm of the mahout when needed, it is no longer possible to stop an elephant who would run away without stinging and hurting him. I then wanted to ride on the elephant. I was told to do this farther as customers should not see it. – Why? – They are told that getting on the elephant makes them suffer … That’s all I remember from this “ethical” camp!

For security reasons, I demand that all mahouts carry a dacco with them, even if they do not use it. And, as the dacco seems scary (to people, not elephants) we decided to create a new style of dacco, which, obviously, is neither cutting nor sharp. In fact, it’s exactly the same, but it seems softer and no longer shocks people!  So here is the new generation dacco that we use at home.On the left, the traditional dacco that gives the impression of being cutting and sharp. On the right, our new dacco has a curved stem and rounded tip. The use and the results are exactly the same, but the aspect reassures those who would tend to see abuse and brutality where there is none! ”